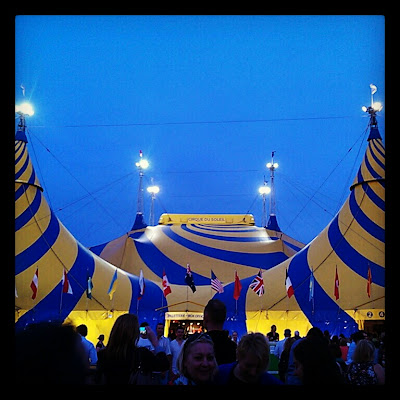 I first saw Cirque du Soleil in Vegas at the end of last year.  Forking about $300 odd was painful but it was amazing and actually worth the money in my opinion.  I loved that they took into consideration every single aspect of a performance while putting it together.  There was a fantastic interdependence between the choreography and costumes, set, props, lighting, and the live band.  They managed to consider every tiny element of the performance and tie everything together brilliantly.

'O' in Vegas starts with someone getting pulled onstage from the audience and then sucked up, disappearing into the air.  The stage is made entirely of water which makes for a spectacular show.  They use water and the stage in ways I would never have thought of, it's truly amazing.  We got seats in the row just behind the 'splash rows' but even the splash rows didn't get very wet.

The standout part of the performance for me was when a fire dancer came out.  It was the first time ever I felt (literally) the difference between watching a show live and watching it on tv.  The entire performance had been quite cold because of the huge pool of cold water that was the stage.  When the fire dancer came out, you could actually feel the heat coming off the stage.  It was an amazing feeling, I'd never experienced anything like that (I mean obviously I know what heat feels like, but that type of a feeling in a performance).

They also inject comedy into it very cleverly.  'O' had 2 clown friends and their interaction was hilarious.  It lightened the mood of what is otherwise a pretty non-funny performance.  Funny aside, it's still jaw-dropping.  Some of the stunts - you can't work actually out how they've executed them.  For example some performers exited the stage VIA the water pool - as in went underwater and never came back up.  Some other performers actually emerged from the water and you wonder how long they had been sitting there.  Sometimes there was a floor just under the water so performers could run across and it looked like they were running on water.  Sometimes there was no floor at all and performers dove into the water.

There's only so much I can describe in words but believe me, it's amazing.

'Ovo' was similarly amazing.  Not quite as perfected and polished as O but given it was 1/5 of the price, I was very happy with the performance.  Ovo features bugs - grasshoppers, lady bugs, butterflies, etc.  The comic injection comes in the form of these 3 bugs - boy bug chases girl bug with the assistance of old cranky boy bug.

The performance wasn't as polished as O - I did notice a few mistakes but they recover so quickly that if you weren't paying attention you would have no idea.  But some of the stunts were equally as impressive.  My favourite was the climbing wall they had with the trampolines underneath.  I enjoyed watching the grasshoppers bouncing on the trampoline and jumping/climbing the wall.

Overall I was happy with Ovo, but it didn't blow my mind like O did.  I walked out of O feeling like I had just experienced a sixth sense hehe.  But I didn't think O was 5x better than Ovo like the ticket price indicated (although I did get Ovo on sale).


If you do get an opportunity to see a Cirque du Soleil show DO IT.  I would say all of them are good as I've heard rave reviews about LOVE and Mystique as well.
Posted by Kay HermosaVogue at 11/16/2012 03:58:00 pm