This is what I kept telling myself to get through Saturday.

Saturday was the day I was meant to walk down the aisle.  It was the day I had been planning towards for over a year (and really, my whole life).  I secretly hoped it would be rained out and freezing cold.  At least that way I could pretend to be happy that I wasn't getting married in the cold and wet.  But no it was a gloriously beautiful winter's day.

I intentionally planned things for the day to distract me from thinking too much about it.  But it was hard.  The first thing I saw on facebook that morning was a friend had gotten engaged.  I felt like a selfish bitch that my first reaction was hurt/pain/sadness before being happy for her.  I knew I shared my wedding date with 2 other ladies and it was SO hard seeing happy wedding pics on facebook that day.

I ended up avoiding social media at all costs and instead read a book (this is something I should electively do more often and not only when people are getting married).  And whenever I started lamenting about "what could have been" I just told myself that the day would be over in 24 hours and I could get through it.

Luckily I was tasked with taking my aunts (who are in town from HK for said 'wedding') around Sydney to see the sights.  It actually worked out well because it gave me an opportunity to say goodbye to Sydney myself. 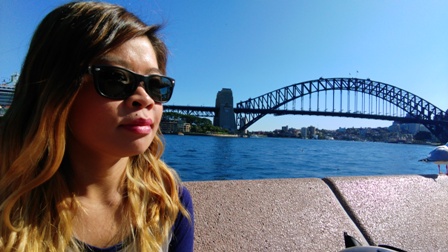 There was residual sadness yesterday but now I'm in the final week at my job and counting down the days/hours.  My departure is getting scarily close and I just have SO much to get done before I go.
Posted by Kay HermosaVogue at 7/27/2015 10:47:00 am 3 comments:

Rise of the Phoenix

In the past few weeks as I prepare for the move to London I've found myself ticking things off my Sydney bucket list, despite living here for 17 years. It's good to have time to say goodbye to a country instead of hurriedly leaving with a few days notice and not be able to say goodbye, not even to school friends (leaving Papua New Guinea is a story for another time).

One of the things I wanted to do was finish a tattoo I had gotten some 8-10 years ago (so long ago I can't actually remember how long it's been). I'll be honest, it was not really thought out. I knew I wanted something to pay homage to the country where I had lived the first 12 years of my life. So I took the bird that's on their flag (google Papua New Guinea flag) and got that outlined on. Why? Don't know. 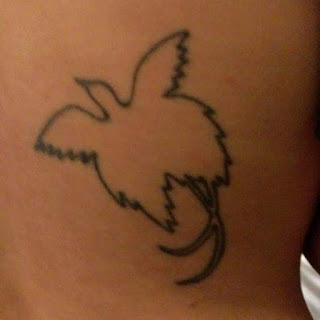 Thankfully my cousin married a supremely talented tattoo artist who saved me from a lifetime of embarrassment. I sent him a photo of what he had to work with. I was pretty difficult, not having much of an idea of what I wanted and giving him very little direction (stylised, I think. Maybe a bit phoenix-y with a bit of colour. Not sure what colours). A few days later I was sent a hand drawn draft. 'Rough' he called it. Beautiful is what I called it. 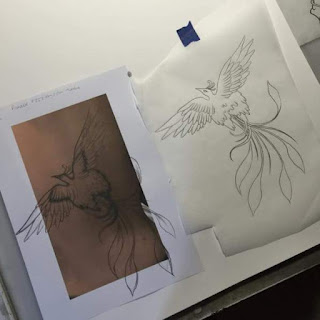 He was good enough to squeeze me in because he didn't really have any openings before I left for London. He lay his drawing on top of the existing tattoo and it literally fit perfectly - if that's not a sign, what is.

The tattooing of the outline wasn't too bad. I had a few "outline" tattoos so this wasn't much of a shock. Till he got to my spine. Oh sweet Lord the spine was painful. But shortly after the outline was done and it looked great.

He mentioned he would start colouring in next. I asked "the colouring in is less painful than the outline right?" He looked at me with this uncomfortable 'should I lie to her' look and I knew I was in for trouble.

He started to colour-in the dark edges of the wings. That was ok pain-wise. He did the red tips of the plumes. Still tracking ok. Then he brought out the light blue dye. Oh my gosh. It's like scratching into your skin in the same spot over and over again. My whole body seized up till I got pins and needles in my left arm. I had to take a break. I got up and walked around a bit to relax and prepare myself for more pain. 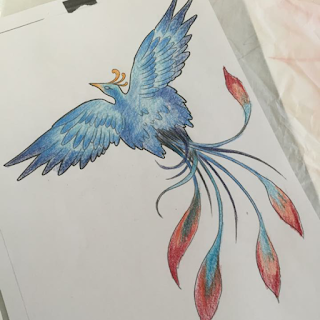 Back for more. I started to regret it. I wondered if I could stop right now and the tattoo miraculously wouldn't look like shit. Why am I doing this to myself. I started sweating and tensing up again. I needed another break.

As I wiped the tears from my eyes (I wasn't crying... My eyes were just moist...) I noticed my hands were shaking. Legit shaking. It took me 5 minutes to un-tense all the muscles in my body. In the background I think I heard him say "home stretch" and then "ten more minutes". Ok suck it up Kay. Ten more minutes, you can do this.

Surprisingly the last 10 minutes weren't actually that bad. He was just doing the yellow ink - beak, bit on the plumes and the 3 things coming out of the head. "Done" was the sweetest word I had heard all day. I had a look in the mirror. Wow. It was SO much better than I thought it could possibly be. I was absolutely thrilled with it and actually a little proud of myself that I did it (it's a bit sad, I know). 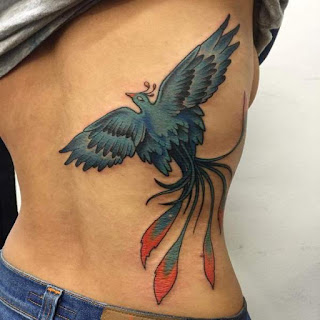 Got myself bandaged up (bepanthen and cling wrap became my best friends) and checked my watch. It was 3pm. I had arrived at 10am with little more than one slice of toast in my stomach.

It's been a few days and I'm being super diligent about the after care. Sleeping and showering are challenging and soon the itchiness is going to set in. But I'm absolutely thrilled with it and so glad I did it. The clever Court mentioned how apt it was that my bird of paradise transformed into a phoenix, just as I am about to embark on a new chapter in life.  Had not even thought about that myself but very fitting!

I'm super duper clumsy and really good at smashing makeup on my makeup table/on the floor.  The item that fares the worst is anything pressed.

I did some googling and found this method to re-pack smashed blush back to its original state.


Ok the reason why I said use 70%-100% isopropyl alcohol if you can get it is because it has a higher alcohol content.  Rubbing alcohol (Isocol is the main brand we have here in Aus) can have up to 50% water.  I used rubbing alcohol the first time I did this and the blush crumbled again not longer after.  I suspect this is due to the water content - I'm sure someone science-y can explain it. 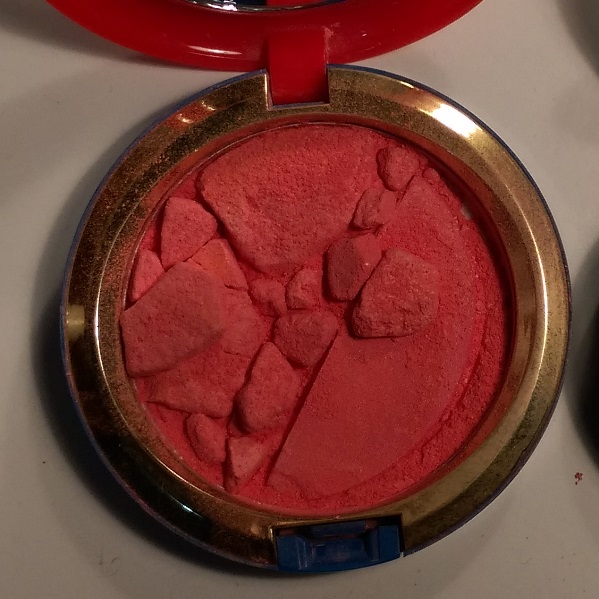 Step 1
Ok this is going to seem instinctively wrong but just trust me.  Get whatever stick you've chosen and smash up the blush until it is literally all loose powder.  Do it. 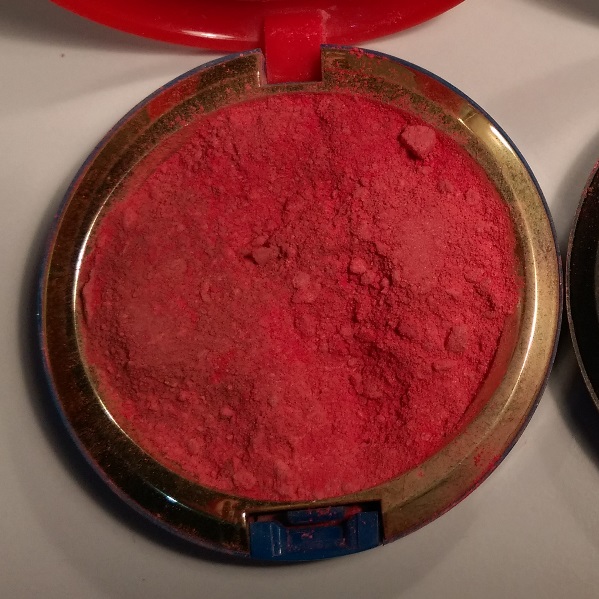 Step 2
Add the isopropyl to the powder til you get a consistency like this... 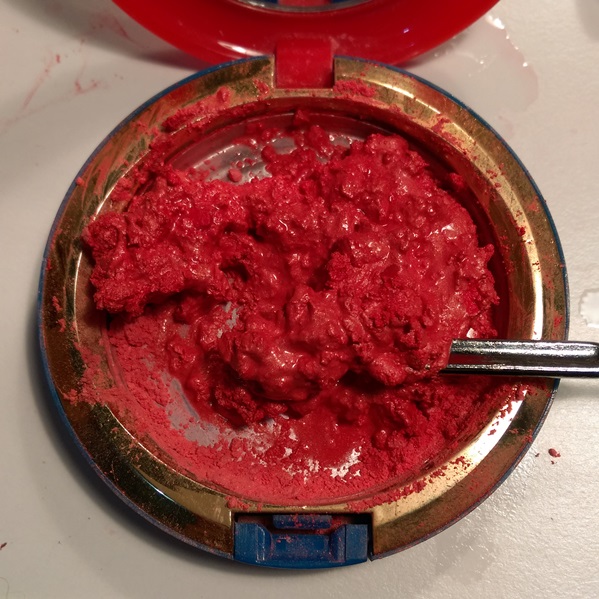 At this point you are wondering what the fck you have done and you're trying to work out how to Ctrl-Z.  Bear with me...

Step 4
Blot blot blot.  Use tissue or paper towels to start blotting the mixture.  You'll get some colour come off but this is normal.  I used paper towels with a pattern embossed into them to give the blush an embossed finish. 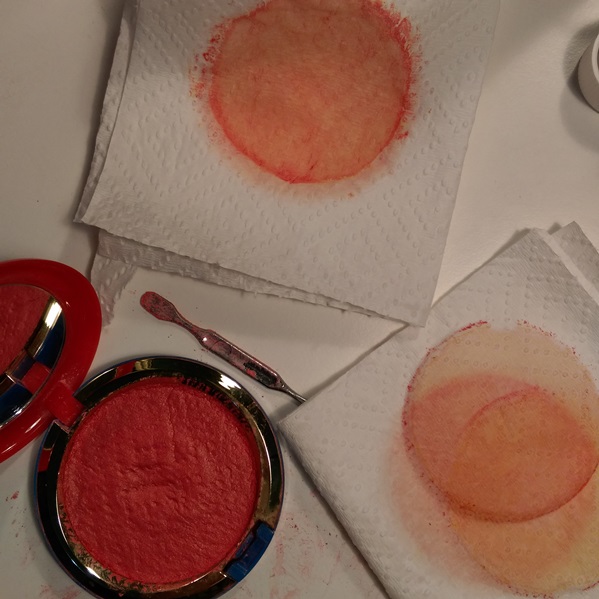 Step 5
Let air dry for some time.  I'm not sure how long exactly but you'll be able to tell when it's usable again.  Ta-da 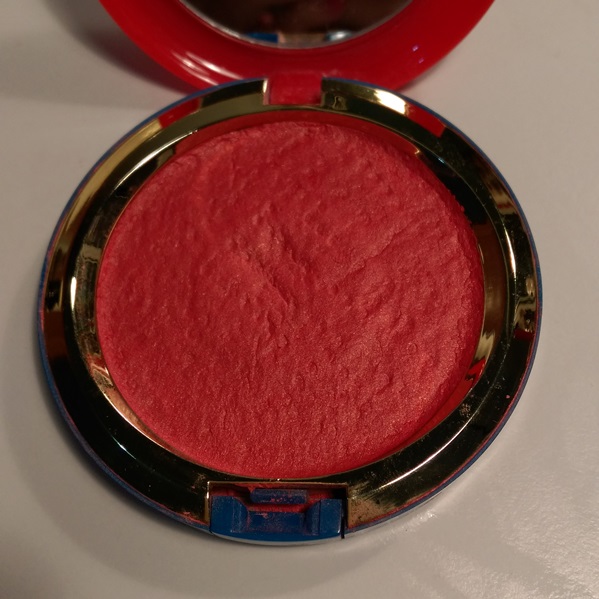 (PS I cleaned the excess blush off the rim because I'm neurotic like that).

The news of Jennifer Garner and Ben Affleck's divorce hit me hard this morning.  I could almost feel a tiny sliver of what they must be going through and it's awful - I don't wish it upon anyone.  However it did give me a good opportunity to put things into perspective.  Unlike them, I don't have huge assets that I need to divide up, don't have a marriage I need to dismantle, don't have kids I need to look after or fight over.  I'm not in the public eye so don't have thousands of people chasing me for a story or meet random people and have them not know what to say to me.

It got me thinking about my situation and made me realise how grateful I am that my situation really isn't that bad (even if some late nights when I'm alone in my room it seems like my life has ended).

I've also had so many amazing people around me who I have to take a moment to thank.


People aside, I'm grateful that:
It's been an absolutely crazy few months.  Hopefully once I get to London and am settled I can actually breathe for the first time without stress/anxiety/fear.
Posted by Kay HermosaVogue at 7/01/2015 11:48:00 am 13 comments: