I mentioned in a previous post that Tom's band was playing at Falls Festival in Lorne.  We took the opportunity to spend a few additional days in Melbourne and decided to stay in St Kilda as we love the area and frankly, a bit sick of staying in Melbourne CBD every time we pop over.


We arrived mid-afternoon on Boxing Day, dropped our gear off at the hotel, and caught a tram (96) into the city.  We walked around Bourke St Mall for a bit, fighting the shopping crowds and eventually had enough.  We walked up to Little Lonsdale and Exhibition and had laksa at Laksa Bar.  This was the first place I ever tried laksa in my 26 years of being (yes I am the worst asian ever) and I absolutely loved it.  What I love about this place is they pack all this stuff into the bowl that most other places don't.  I'm talking green beans, seafood balls, crispy chip things, tomato, fried egg, lemon, and tofu in addition to whatever protein you choose. 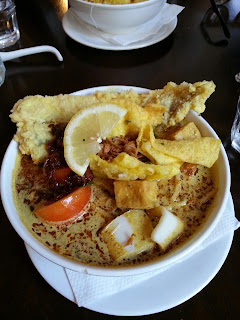 The next morning we wandered down to St Kilda Beach, past the baths and Palais Theatre/Luna Park before heading down Acland St for breakkie.  We stumbled across 95 Espresso which seemed to have that Melbourne vibe we were looking for.  The waitress was super duper friendly and breakfast was really good.  I ordered the big breakfast on pumpkin bread with bacon, sausage, hash brown, and mushrooms whereas Tom ordered the corn bread breakfast.  I loved that the hash brown had rosemary running through it - super tasty.  The pumpkin bread was also pretty amazing (homemade I think I heard the waitress say). 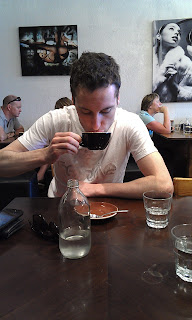 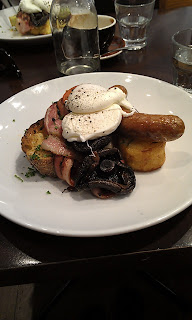 After lunch we thought we would actually brave the sales and headed to DFO Southbank which was empty and therefore much more pleasant than Bourke St Mall. 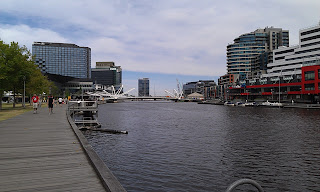 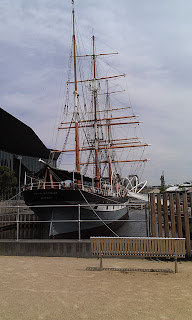 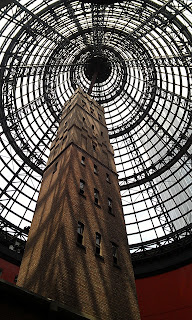 We bought a few things, then headed into Melbourne Central where I dropped Tom off at a music store so he could play with guitars, and I went to meet Ling from Pork Chop's Nest.  I got to meet her famous boys and they are every bit as adorable as I thought they would be.  D and I had almost an hour-long chat about anything and everything.  That 3-year-old is one smart cookie.  The highlight for me was when he told me "I am Chinese, and Mummy's Chinese, and L's Chinese, but Daddy's not."  When I asked him why his Daddy isn't Chinese, he replied "because he's big."  hahahaha.  Then Tom came to meet us and I asked D, "Is Tom Chinese?"  He looked Tom up and down a few times and said "No... because he's big"  hahahahaha if that isn't adorable I don't know what is!


Afterwards we strolled Bourke St Mall and Chapel St a bit and picked up some more goodies.  The weather which had been a pleasantly warm 32 degrees and sunny, turned cold and windy very suddenly.  Novices to Melbourne weather, we didn't have extra jackets so promptly took the next tram home to put more layers on.  Tom had a hankering for pizza and I had read about a fantastic pizza place just down the road from our hotel so we popped in to see what the fuss was all about. 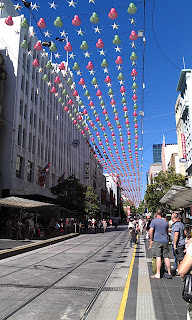 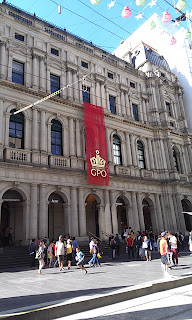 The menu is on a big blackboard at the back of the establishment, which is part restaurant part bar.  We ordered 2 pizzas and a salad with a beer and a cider.  After demolishing an entire pizza and half a salad, Tom decided he needed another pizza.  After 30 mins later I had to roll him home!  The sun was setting as we rolled home and peeked out through the trees. 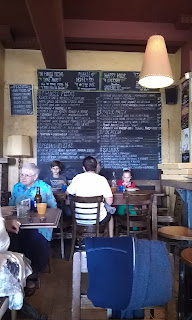 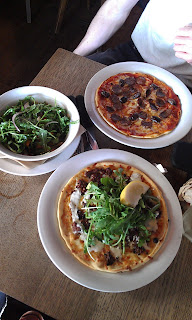 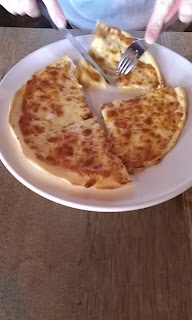 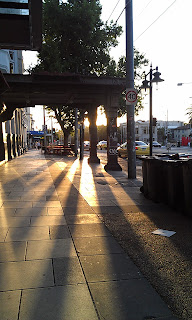 The next morning we had to check out by 11am, so we popped downstairs for breakfast and walked back to the hotel to pack and check out. 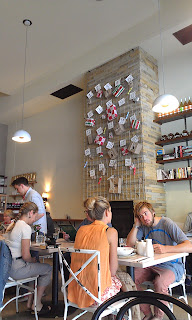 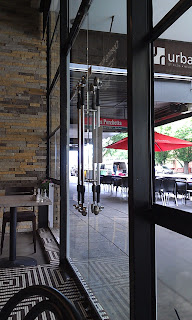 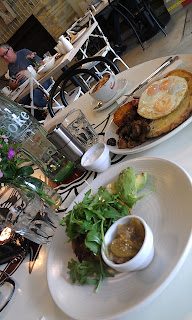 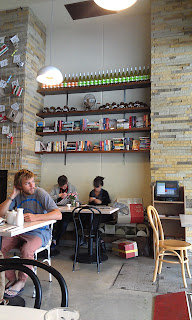