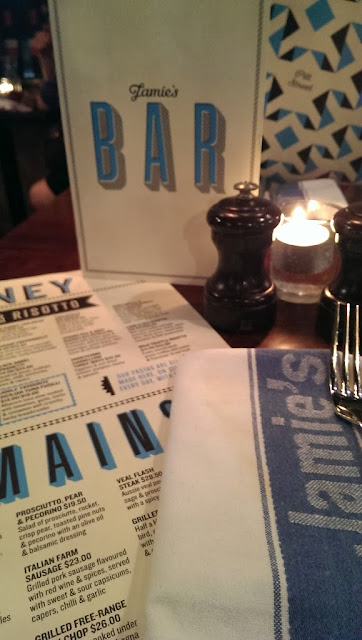 I'm going to be really unpopular here and say I didn't think Jamie's Italian was great.  I absolutely refuse to wait in line for food so we waited until they accepted reservations (you can do it on their website in about 10 seconds flat - super easy).  When we arrived there was a queue about 10 people long even if you had a reservation but it moved quite quickly and we were seated immediately.

Our waiter, John, gave us menus and took us through the specials.  Obviously I had already had a sneak peak at the menu online and had already chosen my 3 course dinner haha (I am SO indecisive that this shaves about 20 minutes off our food ordering time).

The rosemary and parmesan flavours were delicious but I found these buggers painful to eat.  They were deep fried until they became really hard and couldn't be forked so we ended up using fingers.  They also cut the roof of my mouth trying to eat them so I stopped at 2.

Super duper yummo.  The apple matchsticks added a wonderful texture to an otherwise mushy entree.  The highlight of the night for me.

The tomatoes in this risotto were a great tangy touch but I found the capers completely overwhelming and ruined the dish for me.  The rice was a bit grainy and all in all I didn't think it was great.  Wouldn't order it again.

This was Tom's dinner (luckily because I didn't like it at all).  I've had squid ink pasta before but this had a really weird taste to it - I can't even describe the weirdness.

I originally wanted the Pana Cotta for dessert but they had run out so we settled for the Brownie.  I didn't like the Amaretto flavour to the ice cream - didn't think it went with the rest of the dish.  The Brownie was forgettable as was the drizzle of chocolate.  The only thing I enjoyed was the caramelised popcorn.

The service at Jamie's is excellent and prompt but I wouldn't come back here based on the food.  Maybe I had unusually high expectations of it because everyone's been talking about Jamie's since it opened, but I found the food to be of average quality.  Sorry Jamie!
Posted by Kay HermosaVogue at 11/25/2013 04:51:00 pm