This night was crazy and scary at the same time.

Carlos (my cousin's fiance)'s family organised for about 2 dozen Aussies to attend an Argentine Football match (soccer for those of you playing at home).  We know how passionate South Americans are about their football but being there at a game was another experience altogether. 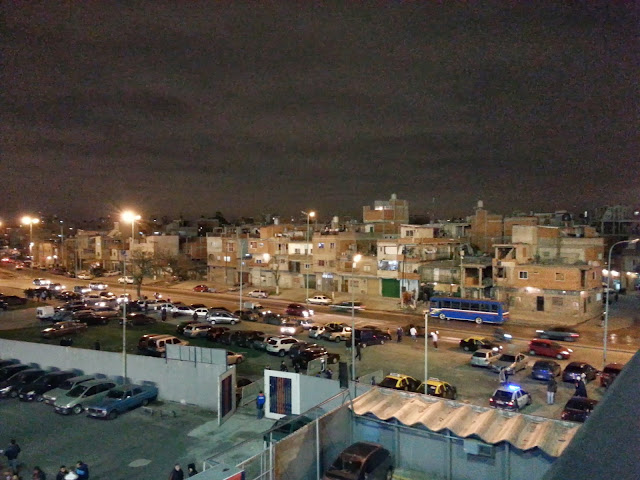 After a 30 minute bus trip into a slum-y area we trepidly disembarked.  Looking around, it was the only time in the entire 4 week trip I felt scared.  We were ushered in the VIP entrance and upon swiping our ticket through the machine, we were patted down by armed police.  As we walked up the stairs to our seats we heard this tremendous shouting/chanting.  Peering out across the road I saw the source of the noise: about 500 people jumping, beating drums and chanting.  I asked Carlos' cousin what was going on and she replied, "That's the opposition.  They're banned from the stadium so they congregate across the road to show their support."

Say what now?  Opposition fans are not allowed into the stadium??  Cray cray. 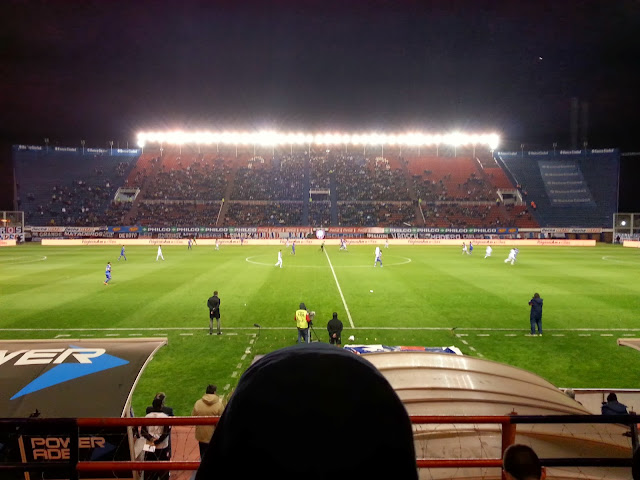 So back to the seats - in the VIP area we had those generic plastic seats.  However the rest of the stadium was just bare concrete.  Apparently they had to remove the seats to prevent fans from ripping them up and throwing them on the pitch.

Riot squad police had to escort the Referees on and off the pitch.  There were about 20 police officers patrolling the VIP area alone.  There was a female Police Officer stationed in the VIP womens toilets.  I shudder to think what it was like at the non-VIP areas of the arena.

What about the game itself?  Well I can't really comment, I was too busy trying not to freeze to death.  It was 4°C but with wind chill factor it felt much colder and I was only wearing tights (silly me).  I literally thought I was going to die I was so cold.

Tom tells me the game drew 0-0.  The Pope would have been disappointed - his team was the team we were supporting.  Oh another thing - Argentineans are super proud of Pope Francis being elected.  They've even started religious tours around Buenos Aires, taking tourists to where the Pope grew up, and all the Cathedrals etc.