I love dumprings.  I'm not the biggest fan of Chinese food (ironic much?) but I luuurve dumprings.

I've frequented New Shanghai a few times now because I live on the north shore, but tonight I visited Din Tai Fung for the first time.  I must say service was impeccable.  I don't expect much from Chinese restaurants but the staff at Din Tai Fung seated me and my friend D immediately and were very warm and welcoming.  They even brought a little stool/bag thing to put our handbags in. 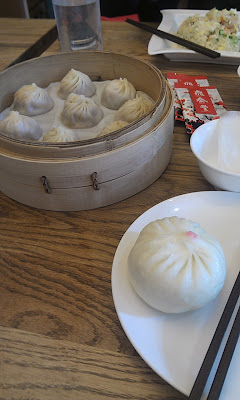 I was a little disappointed with the menu - I was expecting a LOT more dumpling options than they had.  My biggest gripe was NO PAN-FRIED DUMPRINGS.  They are my favourite.  I settled on steamed crab and pork dumplings with the soupy thing inside.  D got the prawn fried rice but refused to eat the prawns because one of them still had a bit of a poo line :S  We each got a vegetable and pork bun which was the biggest disappointment of the meal.  We both wondered whether they had accidentally given us vegetarian only as we struggled to find the pork.  The bun 'pastry' was also really thick and not soft and fluffy.  The filling was 99% vegetable and really bland.  I didn't even finish mine.  The dumplings were good but overly salty.  Too much of a contrast with the pork buns.

New Shanghai on the other hand - service is certainly not as attentive as Din Tai Fung but it's still reasonable, it's not poor by any means.  BUT they have steamed AND pan-fried dumplings.  Heaven.  And more dumpling flavours.  They're not as excessly salty either. 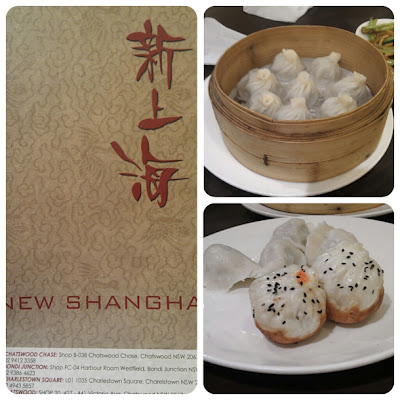