A new approach to food

Ok.  I've decided to make a few changes to my approach to food.  The reason why I'm doing this is because I'm way too lazy to exercise, so the only way to not put on 500kg is to change my eating habits.

Let me also start by saying I am a pretty healthy eater.  I pretty much don't ever eat sweets or anything deep-fried/fast food.  I've never ever gone on a diet in my life because I believe most things are fine in moderation. I started gaining weight (ok when I say gain weight I mean from 43kgs to 46kgs but considering I'm only in the vicinity of 4'10-11", every additional kg looks noticeable on me) when I started living with Tom, because I'd cook dinner and divide it in half for me and for him.  Now, he's 6'2" and plays soccer 3-4 times/week and has a ridiculous metabolism.  Obviously I shouldn't be eating the same amount as him.  3 years later I'm realising this....

So this is my daily food consumption:
Here are the ridiculously large dinners I've been eating (yep that's an entire half chicken in the first pic): 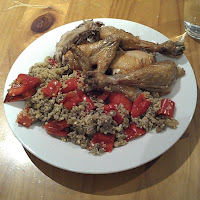 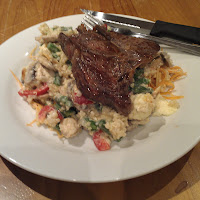 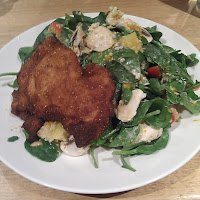 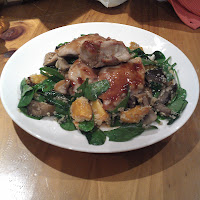 To be honest, it didn't really hit me til I saw some photos of Court's (balletflatsonmyfeet) dinners and how small the portions are that I realised I am eating wayyyyy too much dinner.

This is what my new food routine will look like:
In saying this, does anyone have any good recipes for bircher muesli?  I want to soak in juice overnight, not milk/yoghurt because of the dairy.
Posted by Kay HermosaVogue at 11/13/2012 12:29:00 pm