Crazy busy and I Hate Study

I hate those weeks where you don't get a chance to breathe.  I sat down last night (like I do most Sunday nights) to work out my rough plan for the following week.  It wasn't until I sat down and wrote it down that I realised how much I have to do this week.

Tonight we are going to watch the Cirque du Soleil 3D movie as we bought vouchers ages ago that need to be used by Thursday.  We thought we'd kill 2 birds with 1 stone by having dinner with my family beforehand since we're in the area.

Tomorrow I have no plans apart from studying and running errands like paying bills and posting some stuff I've sold - including my Chanel.  Bye Bye Chanel :(

Wednesday Tom has a gig in Bondi so we're heading there for a night.  Should be good.

Thursday is an ex workmate's farewell.  She's moving to London with her boyfriend so will be super-sad to see her go.

Saturday we have to visit Tom's grandparents as his grandpa had a hip replacement at the ripe old age of 92!  He's doing well but we'll drop in for a cuppa and some cake.  Then later that arvo we're going to celebrate my birthday!!  27 isn't anything exciting but any excuse to get my closest friends together will do.  I've got my dress, almost chosen my shoes, and pretty much sorted my jewelry.  Yay for being organised.

Sunday we're going to have dinner with my family to celebrate my birthday.  No idea where we're going yet, I suspect it will be a surprise.

The most annoying thing about this coming week is that my Applied Finance Final Exam is early next week so I really need this week to prepare for it.  I will have to be super diligent and do as much study as I can during the day.  It's hard though because I prefer studying at night because I'm more 'awake' at night than I am during the day, and also Tom's around for me to ask him questions (he's the Finance whizz in my household).  Doing it during the day when I'm an amazing procrastinator is not easy.  Plus, since when was Probability and Statistics so boring!?!??!  Lucky I'm not working as well because I would be up to my eyeballs and probably not sleeping much this week.

Sorry for the lack of pics.  Here are some random pics from my weekend. 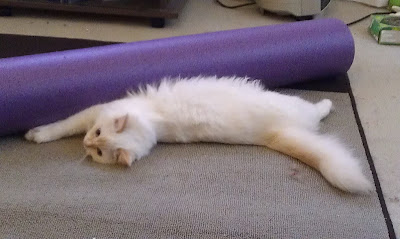