Not sure if it's blasphemous to talk about an Asos Haul in the same sentence as an update to Frugal Feb but here goes.  I've made 'back' over $2,000 so far from eBay and refunds this month.

My Holy Grail Christian Louboutin popped up on ebay in my size (I've been looking for over a year) and although it was a bit steep, I had to have them.  They should be arriving in the next few days but here's a stock pic instead: 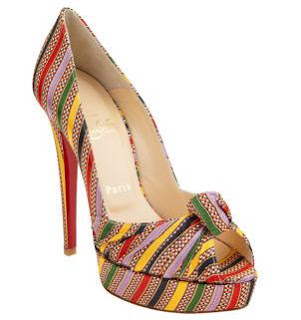 I also got some Chanel ballet flats but waiting to exchange them for another pair so I won't show you guys yet.  They ordered a pair in from Perth and were supposed to call me yesterday or today to pick them up but nothing yet.  I might call them tomorrow to find out what the dealio is.

Last night I was on Asos and put a few things in my cart but ultimately decided not to pull the trigger.  This arvo I get an email for an additional 10% off everything (VALENTINE10 btw) and that was the nudge I needed.  I scored all of the below for £56 (yes I still pay in pounds because it works out cheaper, because my credit card doesn't charge currency conversion fees)!

The top isn't really my style but I'm keen to give it a go.  Been eyeing off the black and white polka dot scarf for yonks, and it finally went on sale!  I think I nabbed the last one....