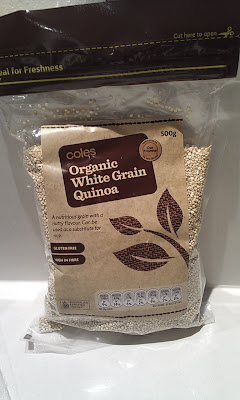 I'd heard a lot about this mysterious grain (grain?  I think it's a grain...) and finally decided I would try it out.  I didn't let my embarrassing mispronunciation of it (quin-oh-ah) and having my sister correct me (keen-wah) deter me.  I googled a few recipes but nothing really stood out to me, so I decided to make my own (bit dangerous, especially with a food you've never cooked before).  I can't give you the recipe unfortunately, because it was made up on the spot slash in my head. 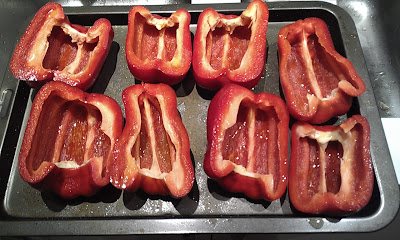 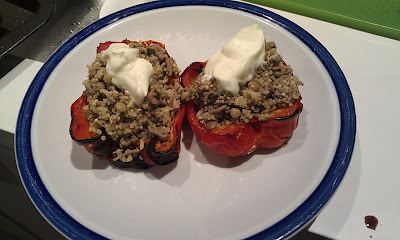 It was pretty good - there's beef mince, rice, quinoa, and green lentils in there.  I've also got white wine vinegar, thyme, Moroccan seasoning, salt, pepper, lemon juice and cumin.  The seasoning might seem over the top but they actually worked really well together.  Topped with greek yoghurt nomnomnom.  I made HEAPS last night so we'd have some for leftovers tonight.  I think tonight I'll shread the capsicum and toss it in with the rice/quinoa/lentils as a side (maybe add some zucchini and or carrot?), and cook up some beef eye fillets. Btw how crazy was the rain yesterday Sydneysiders?  I passed through 4 suburbs between 4pm and 6:30pm and the weather changed between each suburb.  Sunshine and blue skies at Olympic Park, horrendous rain at Gladesville, light rain in the city, then no rain in the city, then horrendous rain and dark storm clouds at Chatswood, then bright skies and sun came out again at Lindfield.  Ok that's 5 suburbs.  I can't count.
Posted by Kay HermosaVogue at 10/23/2012 12:50:00 pm